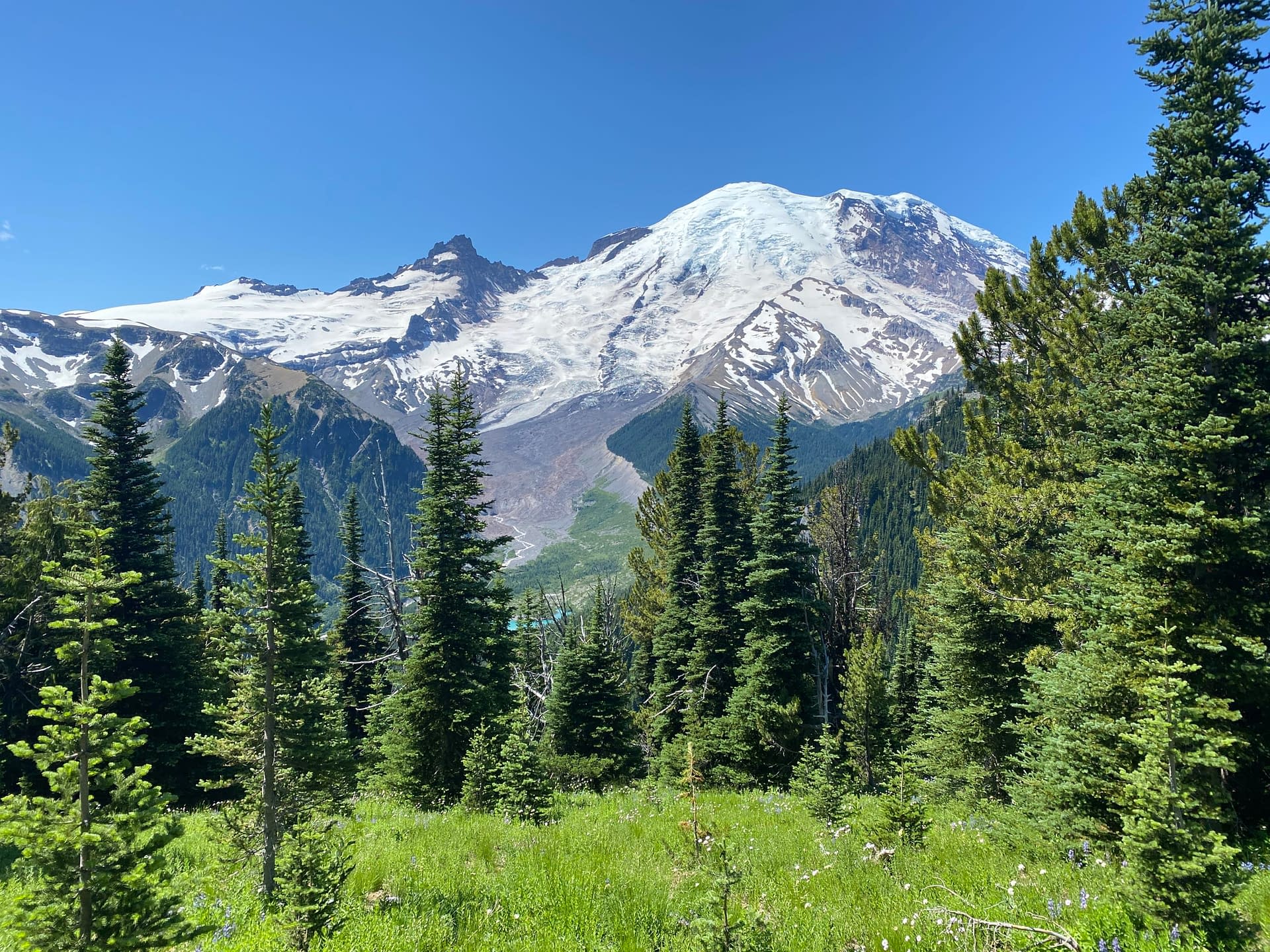 As a native Texan, I have been constantly amazed at how easy it is to forget you are in the largest city in Washington while exploring some of the thousands of acres of dedicated parkland.

On a clear day, iconic Mount Rainier can be seen towering over the southeastern horizon of the metroplex.  At 14,410 feet above sea level, Mount Rainier is the tallest mountain in Washington, the most glaciated peak in the contiguous United States, and still an active volcano. In 1899 Mount Rainier National Park was established; today, visitors flock to it in droves.

I moved to Seattle in March, 2020 to spend the summer working as a guide for Nature Nuts Adventure Travel.  There was no way for anyone to have known at the time, but in hindsight, the first month of a pandemic that caused international and domestic travel to grind to a halt, was probably the worst possible time to try and work as a tour guide!  After several long months, parks have finally reopened, but with the general lull in the tourism industry I knew I wouldn’t be leading many Mount Rainier tours anytime soon.

Seattle to Mount Rainier is an easy day trip (about 2 hours drive time) so I did attempt to visit the park in July. However, I made the rookie mistake of not getting there early enough on a Saturday. I decided I needed pancakes before hiking and, by the time I joined the long line miles from the actual entrance, I knew my chances of seeing the peak that day weren’t good. Due to lack of travel options this summer, Mount Rainier, like many national parks, found itself even more popular than in 2020 than it had been in previous years.  With interstate travel at anemic levels in 2020 and most families going crazy with cabin fever, Mt. Rainier offered a much needed escape for Puget Sound area residents.  Although discouraged that day, I was determined to try again during the week when it hopefully wouldn’t be so busy.

Little did I know that fate was about to give me the chance of a lifetime in the form of two Seattleites who had received a Nature Nuts Adventure’s helicopter tour to Mount Rainier as a birthday gift. With them wanting to do the morning trip and three other guests wanting to do the afternoon trip, we officially had a tour to run! Michael, the founder and owner of Nature Nuts Adventure Travel, would be leading the groups while I came along to learn more about the Washington tours I had planned on leading. We met and parked our cars at the airport at 8 o’clock in the morning. Michael was already there and had the van loaded and ready to go. The two-hour trip went quickly as we chatted during the ride and Michael paused to point out various landscape facts to us. Thankfully the entrance wasn’t as crowded on a Monday, and we soon found ourselves in the park.  It is strange how easy it is to look at a mountain as part of your everyday life but to never make the drive to see it.

I thought the view of the peak was fabulous as soon as we stepped out of the van, but Michael assured us better views were ahead. After a quick restroom stop, we headed to one of the less crowded trails. Although the park was busy with hikers, it is easy to spread out on the trails. When it was necessary to pass each other, everyone was considerate and did a juggle to hike up their masks while passing others on the trail.

After just a few minutes, we found ourselves listening to the bird sounds of the subalpine forests and started to leave the troubles of the city behind us. Due to drastic changes in climate and elevation, the habitats on Mount Rainier are quite diverse. The subalpine zone is from about 5,000 to 7,000 feet of elevation and is where forests become less dense and give way to lush meadows. In mid-July, those meadows fill with breathtaking wildflower displays that bloom aggressively during their short growth season. In Mount Rainier National Park, many meadows remain covered in snow through June, making the flower season short but also a sight not to be missed. As we climbed towards a wide open lookout area, I couldn’t stop looking at the vibrant colors and breathing in the fragrant perfume that hung in the air.

The walk to the observation area was a little steep but not too difficult. We arrived slightly breathless, but it was well worth it to find ourselves face-to-face with the snow covered peak. Michael used a scope to show us the glaciers this park is well known for and to even show us tracks of the brave individuals attempting to climb to the top. After we had our fill (if that’s even possible) we continued on a trail that constantly awarded us with a photographer’s dream view of the mountain and the valley below. When we reached the parking lot again, I turned back for one last look at the lupine blowing in the breeze and thought that this day had been absolutely perfect, but the best was yet to come.

Since we’d been eager to start hiking, we had saved our picnic lunch for after we got off the mountain, so as to not miss the helicopter pick up. I think most people would expect a Seattle National Park tour to include a dry sandwich lunch with a crushed sack of Lays chips, but as if by magic Michael began to pull gourmet lunch boxes out of a cooler. Our options included steak, chicken skewers, or smoked salmon and came with salad, bread, and individual chocolate cakes for dessert. We all ate eagerly and had just finished when we heard the tell-tale whirl of helicopter blades heading our way. Michael was staying to take the afternoon guests to the mountain, but I was returning to Seattle with the morning guests.

As the helicopter came in for final approach, we left our picnic area behind and my heart started to pound from excitement. Once onboard with noise-cancelling headsets on, the pilot chatted to us as we flew along and soon found ourselves gliding by the majestic peak we had just been hiking near. From the air, Mount Rainier is a different thing altogether. Beautiful, imposing, majestic, rising from the Cascades like an ancient guardian of the mountain range, it took my breath away. I turned to tell the mountain goodbye as our flight continued, but there was no time to mourn for we were still buzzing through the sky over peaks, trees, and valleys. Hikers waved to us from Rattlesnake Ridge. Snoqualmie Falls looked even larger from the air, and the many people in intertubes enjoying the hot July day raised their heads to stare as we flew past. I left Texas and moved to the Pacific Northwest because I missed water, mountains and trees (real trees, not mesquite brush). During the shutdown, I had gotten outside as much as I could and hiked everywhere that was open, but it was that summer day in a helicopter that I truly fell in love with the beauty of Washington. All of the troubles of the last several months were left behind as our eyes took in the amazing natural areas surrounding the city we live in. By the time the helicopter buzzed around the Space Needle, we were all laughing with joy. I think all of us were sad to have our ride come to an end but so grateful to have had the chance to experience it.

I had told a friend when I first moved here and was staring out over the Puget Sound at the sunset, “If you ever leave here, you will find yourself missing this place.” Now those words rang even more true. As I drove home, I saw Mount Rainier on the horizon, a sight I had seen so many times, but today I pulled over. I pulled over to look at the snowcap peak watching over the bustling city and knew that I would never take a clear day view of that magnificent mountain for granted again.

Read Post about "My Air & Land Escape to Mt. Rainier During the Pandemic"