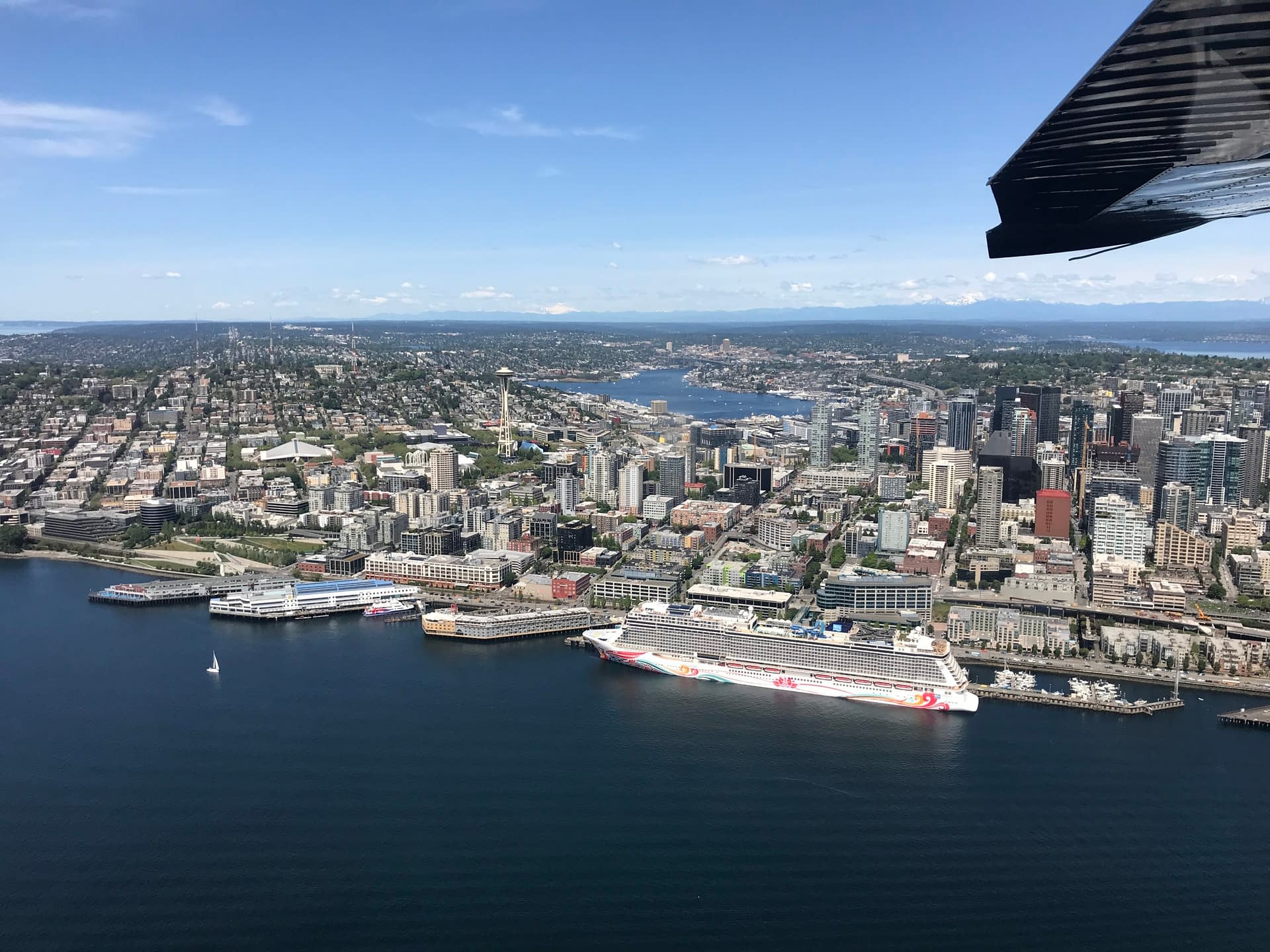 Everything You Need to Know About the Seattle Cruise Terminals: Top Transport Options & Unforgettable Excursions

Seattle is home to two of the country’s busiest cruise ship terminals with over a million passengers coming to the city to embark on cruises through the Pacific Northwest, along the U.S. West Coast and to Alaska, primarily during the summer, although the season runs from late April through early October.

The Seattle cruise terminals are located at two different piers that are about three miles apart along Elliott Bay, Pier 91, also known as the Smith Cove Terminal, and Pier 46, the Bell Street Terminal. Seattle is currently the home port for these major cruise lines:

Getting to the Seattle Cruise Terminals

Bell Street Terminal at Pier 66 is located at 2225 Alaskan Way South on the downtown waterfront near popular attractions like the Seattle Great Wheel, Seattle Aquarium and Pike Place Market.

Smith Cove Cruise Terminal at Pier 91 is located at 2001 West Garfield Street, 10 minutes north of downtown. This is the main cruise terminal; however, there aren’t many facilities nearby.

Many cruise passengers, whether embarking, disembarking or both, ask about cruise ship transfers, including transportation to and from the Seattle Airport (SeaTac). You have multiple options available, including private transfer via limo or town car, shuttle service, public transit/Light Rail, taxis and rideshare apps like Uber and Lyft.

Limo/Town Car Service. There are a number of companies that offer private transfers by limo or town car, with Seattle Town Car one of the most popular options. This comes minimal hassle, though it’s typically the most expensively priced, generally around $100 or more. You’ll be met at Baggage Claim and transported in a comfortable, high-end vehicle driven by a chauffeur.

Private Cruise Transfer. Nature Nuts Travel offers private cruise transfers between SeaTac Airport or downtown Seattle hotels and the Seattle cruise terminals. This option can carry up to 14 passengers (or more by using multiple vehicles) at a flat rate of $299, which works out to just $21 if you’re traveling in a larger group. There’s no mileage limit or any hidden fees.

Shuttles. There are private shuttles available as well, such as Shuttle Express, which typically run anywhere from $25 to $35 per person each way between the Seattle Airport and Seattle cruise terminals. If you’re staying at a hotel in the area, rides can be arranged to take you there as well. The downside to this option is that you’ll be sharing the ride so there may be multiple other pickups/drop-offs along the way that can make for a much longer trip.

Taxis. Taxis are a convenient way to get from SeaTac to Seattle. Seattle Yellow Cab has stands that are easy to locate on the third floor of the SeaTac airport parking garage. Be aware that flat rates don’t apply to the more popular Pier 91 as it is outside of the downtown Hotel Zone. In general, expect to pay $120 roundtrip for two using taxi service.

Ride Sharing Services. Both Uber and Lyft area available to get you to/from the Seattle cruise terminals and SeaTac Airport or anywhere else in the area. You can use the respective app to book your ride and the car will be sent to you. Between the airport and downtown the rates typically run around $40 each way.

Cruise Line Transfers. While the cruise lines will be happy to get you to and from the Seattle cruise terminals, that doesn’t come without a charge. Carnival, for example, charges about $60 per person round trip which is rather pricey, especially if you’re traveling as a family or in a larger group. The upside is that since they’re affiliated with the cruise line you can be sure that they’ll get you to your ship on time. Be aware that they can be a bit restrictive as operating hours are limited to just a few on the day of your departure and arrival and will only get you to or from the cruise port and SeaTac Airport. If you’re hoping to have time to explore the city before or after your cruise, cruise line transfers are unlikely to be an option.

Getting from the Vancouver Cruise Ship Terminal to Seattle

Many cruises depart from the Seattle cruise terminals and then disembark in Vancouver or vice versa. This is a nearly 145-mile journey, leaving lots of passengers wondering how to get between the two. While limo service is available, it’s very expensive. Seattle to Vancouver (or Vancouver to Seattle) private transport is a flat rate private transfer available through Nature Nuts Travel that’s especially ideal for cruise passengers. The one-way trip is $799 for up to 14 passengers (or about $38 each for a group of 14) with no additional costs. It will take you anywhere between the greater Seattle metro area and the Vancouver metro area, including the Canada Place Cruise Terminal in comfort.

There are a long list of private tours and cruise excursions available through Nature Nuts Travel that include transfer to or from the cruise terminals. This is a great way to explore the area before or after a cruise, save money and not have to worry about transport. Both half- and full-day Seattle highlight tours are ideal options for cruise passengers as they’re easy to squeeze into a limited time frame. However, any of the tours can be combined with transfer at one flat rate. You can be picked up directly from the cruise terminal and the company will handle your luggage for you, or store it during the tour and then bring you to the airport or drop you off at your hotel afterward.

Only the Best of Seattle’s Must-See Spots. If you’re short on time, the four-hour, half-day excursion is a great way to experience Seattle’s top “must-see” spots. The private tour is $59 per person for groups of up to 14 and will bring you to highlights like the Space Needle, Pike Place Market, Gas Works and Kerry parks, Chihuly Glass Museum and the Starbucks Roastery Reserve.

Best of Seattle, Snoqualmie Falls & Wine Tasting. For those with eight hours to spare, a full-day excursion(from $89 per person for up to 14) will bring you to all of the Seattle highlights as outlined above, plus you’ll get to travel outside of the city to visit magnificent Snoqualmie Falls. Located in the Cascade foothills, the 268-foot-high falls is one of Washington’s most popular attractions and has appeared on the big- and small-screen, including the cult hit “Twin Peaks.” After you’ve enjoyed it, you’ll get to head to nearby Woodinville for a wine tasting.

Read Post about "My Air & Land Escape to Mt. Rainier During the Pandemic"